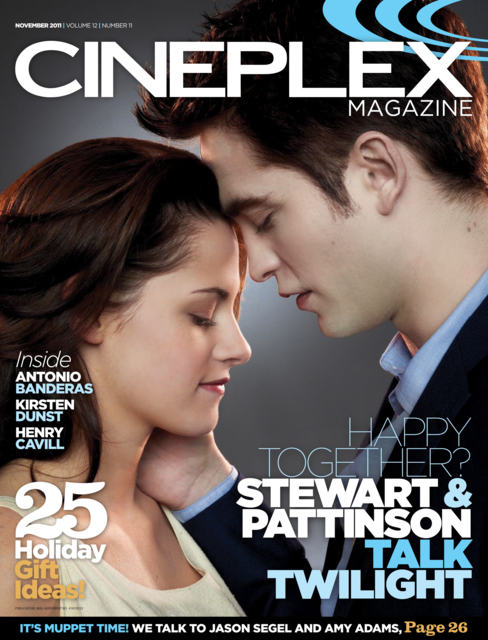 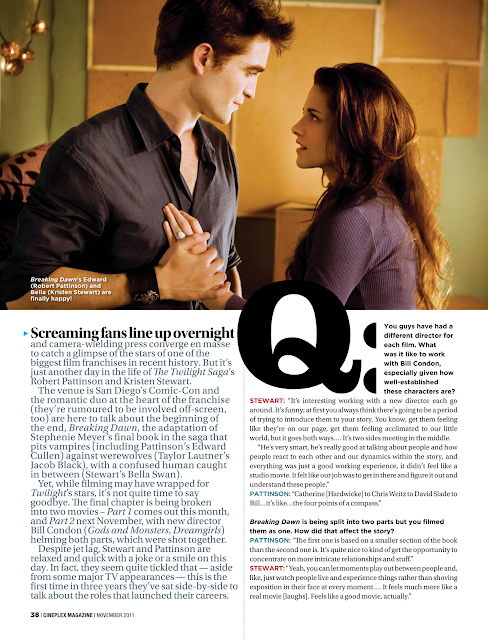 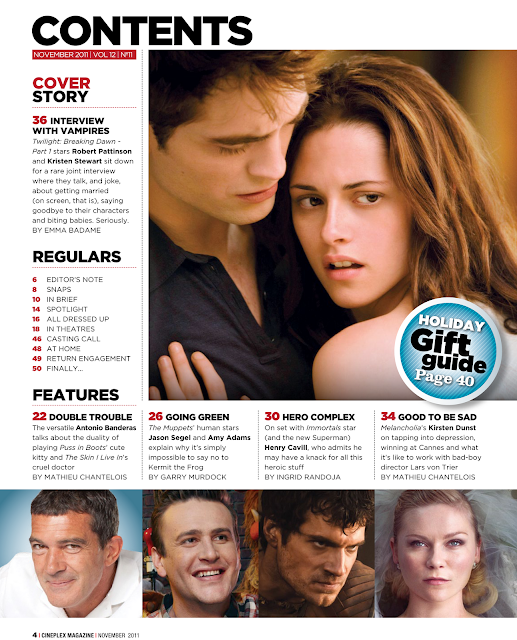 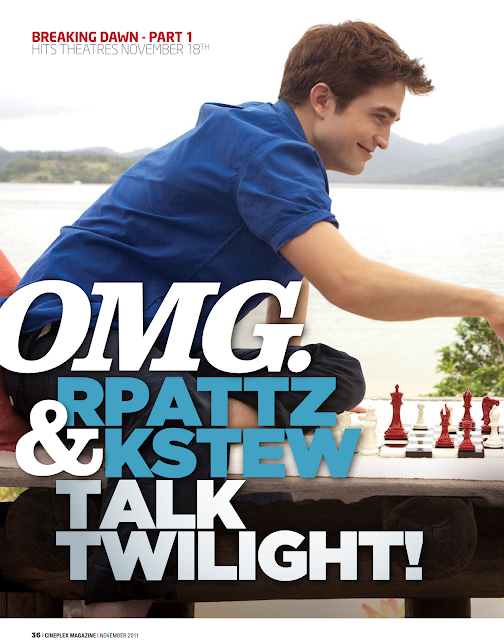 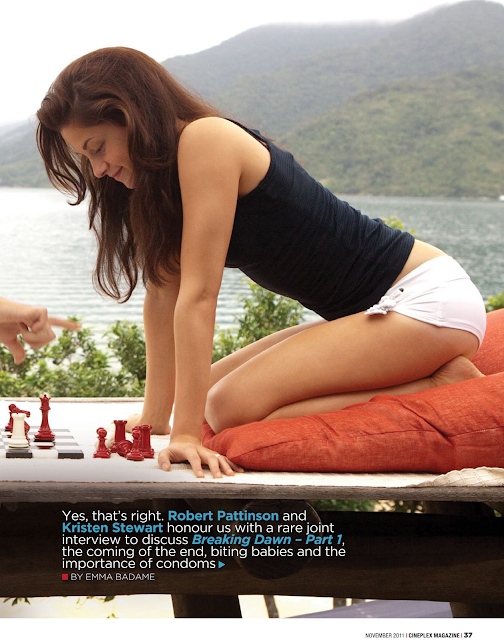 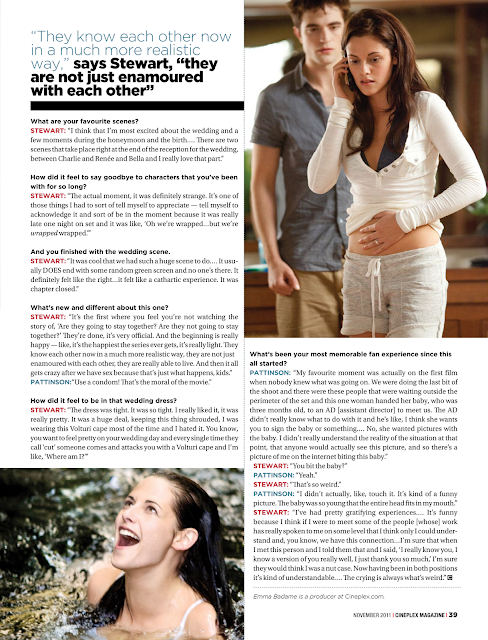 ENGLISH:
Screaming fans line up overnight and camera-wielding press converge en masse to catch a glimpse of the stars of one of the biggest franchises in recent history. But it’s just another day in the life of The Twilight Saga’s Robert Pattinson and Kristen Stewart.
The venue is San Diego’s Comic-Con and the romantic duo at the heart of the franchise (they’re rumoured to be involved off-screen, too) are here to talk about the beginning of the end, Breaking Dawn, the adaptation of Stephenie Meyer’s final book in the saga that pits vampires (including Taylor Lautner’s Jacob Black), with a confused human caught in between (Stewart’s Bella Swan).

Yet, while filming may have wrapped for Twilight’s stars, it’s not quite time to say goodbye. The final chapter is being broken into two movies - Part 1 comes out this month, and Part 2 next November, with new director Bill Condon.

Despite jet lag, Stewart and Pattinson are relaxed and quick with a joke or a smile on this day. In fact, they seem quite tickled that - aside from some major tv appearances - this is the first time in three years they’ve sat side-by-side to talk about the roles that launched their careers.

Q: You guys had a different director for each film. What was it like to work with Bill Condon, especially given how well-established these characters are?

Stewart: “It’s interesting working with a new director each go around. It’s funny; at first you always think there’s going to be a period of trying to introduce them to your story. You know, get them feeling like they’re on our page, get them feeling acclimated to our little world, but it goes both ways...It’s two side meeting in the middle. He’s very smart, he’s really good at talking about people and how people react to each other and our dynamics within the story, and everything was just a good working experience, it didn’t feel like a studio movie. It felt like our job was to get in there and figure it out and understand these people.”

Q: Breaking Dawn is being split into two parts but you filmed them as one. How did that affect the story?

Pattinson: “The first one is based on a smaller section of the book than the second one is. It’s quite nice to kind of get the opportunity to concentrate on more intricate relationships and stuff.”

Stewart: “Yeah, you can let moments play out between people and, like, just watch people live and experience things rather than shoving exposition in their face at every moment...It feels much more like a real movie [laughs]. Feels like a good movie, actually.

Q: What are your favourite scenes?

Stewart: “I think that I’m most excited about the wedding and a few moments during the honeymoon and the birth...There are two scenes that take place right at the end of the reception for the wedding, between Charlie and Renee and Bella and I really love that part.”

Q: How did it feel to say goodbye to characters that you’ve been with for so long?

Stewart: “The actual moment, it was definitely strange. It’s one of those things that I had to sort of tell myself to appreciate. - tell myself to acknowledge it and sort of be in the moment because it was really late one night on set and it was like, ‘Oh we’re wrapped...but we’re wrapped wrapped.’”

Q: And you finished with the wedding scene.

Stewart: “It was cool that we had such a huge scene to do...It usually DOES end with some random green screen and no one’s there. It definitely felt like the right...it felt like a cathartic experience. It was chapter closed.”

Q: What’s new and different about this one?

Stewart: “It’s the first where you feel you’re not watch the story of, ‘Are they going to stay together? Or not stay together?’ They’re done, it’s very official. And the beginning is really happy - like, it’s the happiest the series ever gets, it’s really light. They know each other now in a much more realistic way, they are not just enamoured with each other, they are really able to live. And then it all gets crazy after we have sex because that’s just what happens, kids.”

Pattinson: “Use a condom! That’s the moral of the movie.”

Q: How did it feel to be in that wedding dress?

Stewart: “The dress was tight. It was so tight. I really liked it, it was really pretty. It was a huge deal, keeping this thing shrouded, I was wearing this Volturi cape most of the time and I hated it. You know, you want to feel pretty on your wedding day and every single time they call ‘cut’ someone comes and attacks you with a Volturi cape and I’m like, ‘Where am I?’”

Q: What’s been your most memorable fan experience since this all started?

Pattinson: “My favourite moment was actually on the first film when nobody knew what was going on. We were doing the last bit of the shoot and there were these people that were waiting outside of the perimeter of the set and this one woman handed her baby, who was three months old, to an AD (assistant director) to meet us. The AD didn’t really know what to do with it and he’s like, I think she wants you to sign the baby or something...No, she wanted pictures with the baby. I didn’t really understand the reality of the situation at that point, that anyone would actually see this picture, and so there’s a picture of me on the internet biting this baby.”

Stewart: “You bit the baby?”

Pattinson: “I didn’t actually like, touch it. It’s kind of a funny picture. The baby was so young that the entire head fits in my mouth.”

Stewart: “I’ve had pretty gratifying experiences ... It’s funny because I think if I were to meet some of the people whose work has really spoken to me on some level that I think only I could understand, and you know, we have this connection...I’m sure that when I met this person and I told them that and I said, ‘I really know you, I know a version of you really well, I just thank you so much,’ I’m sure they would think I was a nut case. Now having been in both positions it’s kind of understandable....The crying is always what’s weird.”