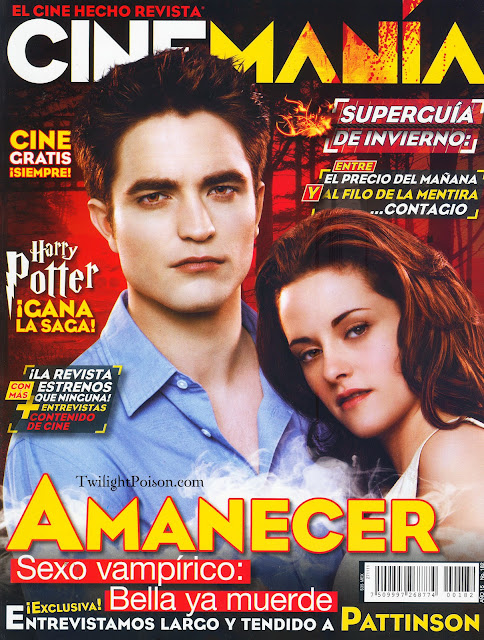 Can you share something about Kristen?
The only thing she likes to watch on TV is the cooking channel, especially when she’s on set. She has her TV on all the time in her make up trailer. That’s her only diva behavior (laughs); the cooking channel must always be on, any time, everywhere.

Do you have a favorite scene in this movie?
The birth scene is so different from the entire saga. It’s so harcore and gory, at least when we were filming it. There’s not way to tame it in the book. That was brave.

As far as I know, you had a nice time filming the scenes with Mackenzie…
For a long portion of the filming we had an animatronic baby. It was for the scene where Bella sees her for the first time. It was like Chucky (laughs) Chucky Renesmee (laughs louder).

But you also filmed with real babies right?
Yes, and I liked it. I like babies and filming with them. It’s especially funny because you’re trying a person that is like a statue the entire time. But when there’s a baby, nobody can be that tough, you can’t hold back your emotions and that’s what Edward is doing the whole time. Having a baby makes you more human. When you’re working with little kidsm they do whatever they want, so you have to improvise, which is cool.

With this fame you have and your relationship with Twilight, do you think it will be harder to get the type of work that you really like the most?
Of course. Before Twilight I did castings for so many things, and I was always left on the top 3. They gave the role to someone who was already more famous than me, and I kept thinking how unfair it was, so I thought the only way was to become more famous. But when you’re super famous, you get offered tons of bad stuff, in movies where they’re not even concerned with the cast. And if you haven’t done much work, directors look at you like an unknown and there’s not stigma attached to your name. It’s harder to get some roles sometimes. It’s weird.

So you’ve had doors closing to you…
If you’re a complete unknown, you have more chances. After Twilight, things are very different, depending where the money comes from. If there’s not a star attached, there’s no way that you can sel a movie, so that forces you to make a good movie. But if you don’t, it’s like “Since he’s involved, we need to get teens interested,” so they change the story, and you end up having that pressure. A good director will prefer not to deal with that stuff. But it’s true that if you find the eprfect role, everything will fall into place. But there’s less options. Now that I have a very specific image, it’s hard to find roles that fit into it.

That didn’t stop you from getting Cosmopolis.
It was amazing. I let my spiral of paranoia go out of control and I thought all the good directors would want nothing to do with me now. And then Cronenberg makes this offer directly to me. I had neve even met him before.. I had a grat time during filming, and I kept saying “Am I good enough? I don’t know what I’m doing,” and he said “why do you think like that? You are an actor,” and the only reason that happened to me it’s because I became this sort of celebrity, and I’m worried that people won’t take me seriously.

What did Cronenberg see in you that he chose to cast you?
Nothing. Just interviews. And he saw Remember Me. But this character looks like nothing I’ve ever done before.. When I first read the script, I thought I couldn’t play the character. I loved the script, but I was afraid. I said I called him in a week to find out if I wanted the part or not. I spent an entire week thinking how to say no. The only thing I thought was “Look, I can’t do this because I’m a coward and I don’t know how to play it (laughs really loudly). So I said yes, and told him I didn’t know what the story was about. He said he didn’t know either. So we started collaborating from that point on. I had never worked with a filmmaker that had so much confidence in himself. He just said everyday “let’s see what happens,” there were no rehearsals, nothing. It was insane.


We know you love to watch movies, what was the last movie you saw?
Red Riding Hood. That was the last time I saw anything. Going to the movies is impossible after Twilight. You’re trapped in a dark room and don’t know what is going to happen, and I get nervous and think of everything that I’m going to have to deal with after it’s over. That time there were 60 people outside the theater. Before I saw Inception. I went to a theater in the middle of nowhere and there were 20 paparazzi waiting for me outside. I couldn’t get rid of them all day. 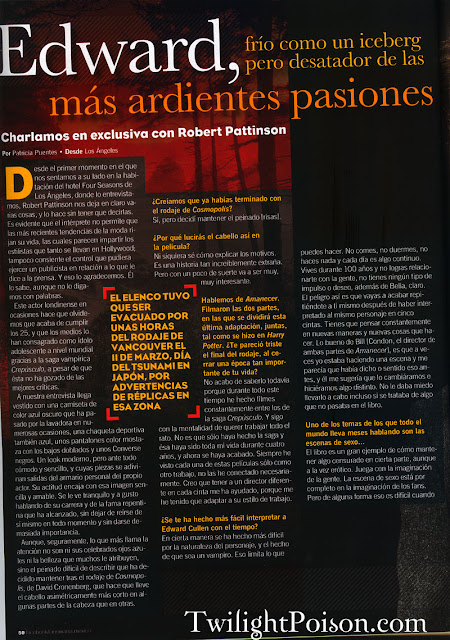 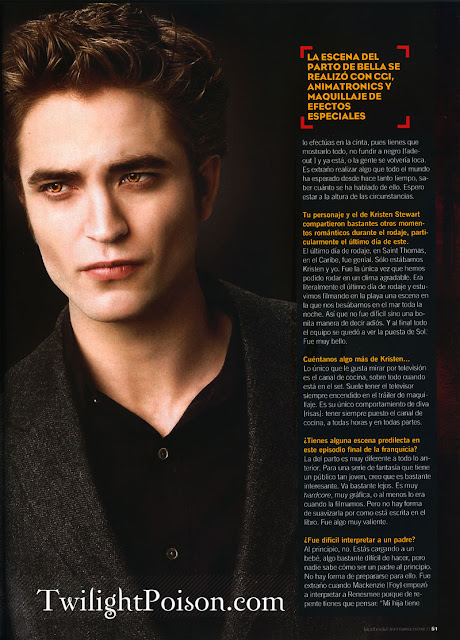 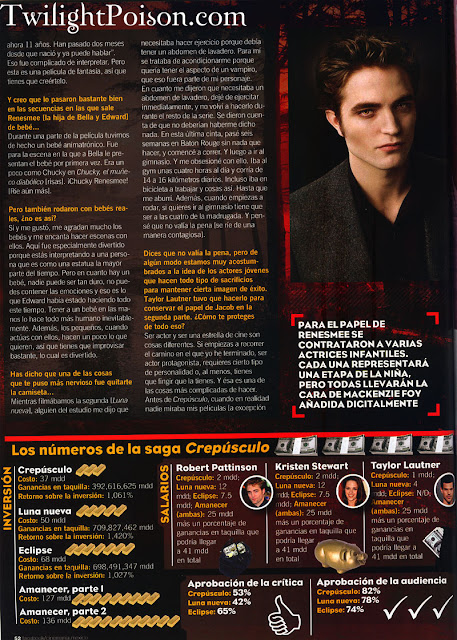